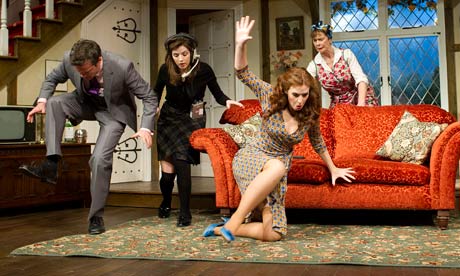 There are times when it is hard to be anything but negative and pessimistic, when we can all do with a little light relief. It is said that laughter is the best medicine, if so, this play ought to be prescribed on the National Health Service.

If you find this review at all confusing, then it simply follows the whirlwind nature of the show itself.

A play within a play, the first act takes place during the disastrous technical rehearsal of a farcical play ‘Nothing On.’ The brilliantly cynical and embittered director (Robert Glenister) emerges from the Old Vic’s stalls, whilst attempting to salvage his production as lines are fluffed, props are forgotten, and cast members go missing as the plot unfolds.
The second act is where we see the same play, but with the set reversed we see behind the stage as the audience enters the murky world of backstage politics. The private lives of the actors are playing havoc with their performances, producing an astonishingly clever piece of work played almost entirely in mime.
The third and final act shows the play on its last legs, the set is reversed again, weeks later when most of the actors are no longer on speaking terms and everything is going wrong, doors continually slam, plates of sardines are misplaced and at least one actor end up with their trousers around their ankles. The show of course must go on as actors and characters continue amid the confusion. Some stick robotically to the script, others ad lib in desperation. Identities are blurred and the fourth wall is repeatedly broken.

Glenister is marvellous as the megalomaniac control-freak director Lloyd Dallas who would clearly prefer to be elsewhere directing Shakespeare.

Celia Imrie is majestic as veteran luvvie Dotty Otley, the scatty ageing actress who fails to cope with a telephone, a plate of sardines and a newspaper.

Amy Nuttall is the alluring young actress Brooke Ashton, oblivious to most of her co-stars personal issues, with a running gag of losing her contact lenses and spending most of the play in her underwear she competes with the quiet, over-sensitive but smart Assistant Stage Manager Poppy Norton-Taylor (the lovely Aisling Loftus) for the affections of their cheating Director.

Karl Johnson is Selsdon Mobray, the old school drunk with an fondness for whiskey, most likely to come on stage too soon or too late and then fluff his lines.

Jamie Glover as Garry Lejeune spends most of his time running up and down stairs, opening and closing doors and chasing Amy Nuttall’s character. In the second act he is particularly funny when his shoelaces are tied together and he is forced to hop around the stage. He also performs an absolutely spectacular fall down the stairs.

The remaining cast are Janie Dee as reliable and dependable Belinda Blair and Jonathan Coy as Freddy Fellows who insists on questioning his character’s motivation for the most inane actions. They both struggle to keep their co-stars in line and the production running.
There is also Paul Ready as Timothy Allgood, the hapless Stage Manager who is focred to make apologies to the audience in front of the curtain.

Peter McKintosh’s marvellous design of the living room with a staircase and landing complete with multiple doors, with provides much of the physical comedy.

Lindsay Posner’s first rate direction creates careful characterisation with the excellent cast in a hilarious production, along with choreography from Kate Waters.

So laughter is the best medicine, but a word of warning, if you watch this play you may just die laughing.