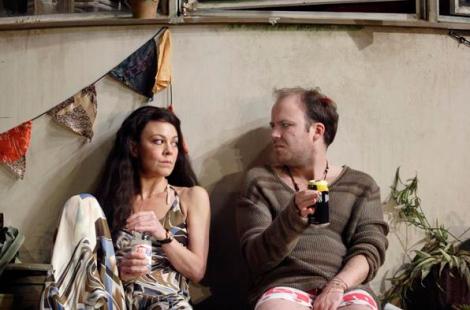 The Last of the Haussmans – National Theatre, London

Julie Walters is advertised as the main draw for this production. She plays Judy, a former hippy, now living in a ramshackled seaside house, having just had treatment for a melanoma she is being visited and reluctantly cared for by her grown-up children Libby (Helen McCrory) and Nick (Rory Kinnear.)
It’s these characters however who lead (and for me, steal) the story, in particular Libby, who also has a tempestuous relationship with her own teenage daughter Summer (Isabella Laughland)

Walters is a delight, the typical ageing hippy, she single-handedly manages to get the audience to reflect on how the free love era has shaped subsequent generations.
McCrory is somewhat of a revelation, she’s the reliable and seemingly put upon offspring that is always on hand to provide help and support but is often overlooked when needing affection herself. I should probably say at this point that she also has one of the best wardrobes I’ve seen for quite some time, and that I spent most of the play suffering from a major case of costume envy.
Kinnear is Nick, the gay former drug addict, son and sibling, who has perfected the art of vanishing at the first sign of trouble. On a side note, I was surprised at how much he suited the eyeliner and nail varnish, definitely a look that should be repeated.
Laughland is brilliantly cast as Libby’s outspoken teenage daughter, with a temperament to rival her mother she performs perfectly alongside her elder co-stars.
Alongside these characters are the two outsiders, visitors to the house. Firstly is local doctor Peter (Matthew Marsh,) another old hippy who spends the evenings with Judy getting drunk and reminiscing about the ’60s, however it is quickly apparent that the real reason for him hanging around the house is that he’s having an affair with Libby. Secondly is local boy Daniel (Taron Egerton in his professional stage debut,) he uses the Haussman’s swimming pool as relaxation after caring for his sick mother but also develops a fondness for one of the family.

The Last of the Haussmans is the debut play from former actor Stephen Beresford, and one that is highly entertaining. Moments of real humour, poignancy, and heart are intertwined as the relationships between the characters become even more complex.
It is also quite lovely to see established actors, who you would normally expect to see in classics, perform in a brand new, modern play.
This has a funny and entertaining script, with the characters realising that they are to blame for the mistakes they have made, although they remain oblivious as to how to stop making them in the future.
For a debut play, The Last of the Haussmans is very impressive and Vicki Mortimer’s detailed set adds to this enjoyment and provides the perfect setting for some brilliant performances.