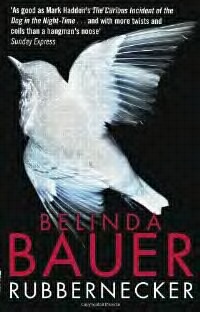 The main character in Rubbernecker is Patrick, a young man with Asperger’s Syndrome, this provides a very effective point of view for a crime novel, a character who is socially inept, obsessive, with a child-like naivety, but a determination to interrogate the manners and behaviours of those around him.

However, we mustn’t try to compare this story with that of ‘Curious Incident.’ There are other major points of view in this novel, the first-person narrative of a coma patient who fight to try and communicate with those around him, and Patrick’s mother as she fails to deal emotionally with who he really is.

When Patrick was a small boy his father was killed after being hit by a car and since that moment he has obsessively tried to work out what death means. He spent his childhood examining a variety of dead animals without finding the answer, and is now studying anatomy at college in Cardiff, hoping that the dissection of corpses might tell him what he wants to know What happens when people die?

As Patrick meanders his way through student life he makes a friend and learns some social skills, but he also discovers a mystery about the cadaver he is dissecting. He refuses to acknowledge that some questions cannot be answered and so he relentlessly pursues the matter, uncovering crimes that are thought to have been dealt with, putting himself in danger in the process.

The novel works brilliantly on a number of levels, the hospital ward, the dissecting room, and the student house, especially when seen through Patrick’s eyes they feel even more realistic.
Belinda Bauer has created wonderfully baffling and endearing character in Patrick and I look forward to reading other pieces of her work.